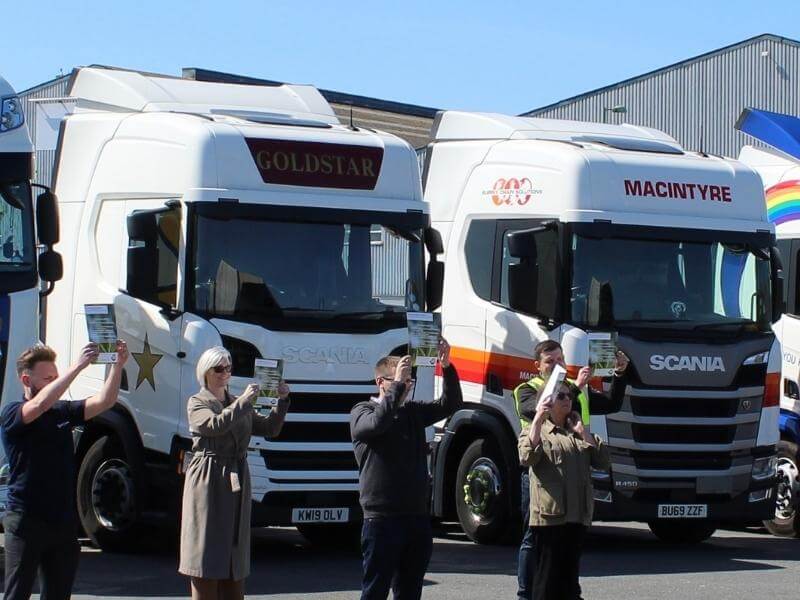 Goldstar Transport has chosen to support Litter-Free Felixstowe (an active community interest company with nearly 1000 members) in taking their campaign to a national audience and to raise awareness of the issues. The proposal is to lobby the relevant authorities and to unite all major road users in tackling and, ultimately, eliminating the problem.

Few people will have failed to notice the dramatic rise in the amount of litter alongside the UK’s major roads and in the numerous laybys across the country. This is not only very unsightly but also has a detrimental impact on wildlife and the environment overall.

Goldstar Transport has chosen to support Litter-Free Felixstowe (an active community interest company with nearly 1000 members) in taking their campaign to a national audience and to raise awareness of the issues. The proposal is to lobby the relevant authorities and to unite all major road users in tackling and, ultimately, eliminating the problem.

As a business we are going to adopt signage for our depots and stickers for our fleet to reinforce the principles of the campaign. We will also be agreeing to educate our drivers on the Litter-Free Roads & Laybys pledge and including the principles of the pledge in both drivers handbooks and inductions.

Why do people litter?

Laziness and carelessness have bred a culture of habitual littering. Carelessness has made people throw rubbish anywhere without thinking about the consequences of their actions. Many people do not realize or underestimate the negative impacts of littering on the environment. People believe that their individual actions will not harm society as a whole. As a result, it is common to see people throwing wrappers, cigarette butts and other rubbish in public areas. The majority of people believe that there are others who will clean up after them and consequently, the responsibility of cleaning up litter usually falls on local volunteers, local councils and ultimately taxpayers.

Litter adversely affects the environment. Littering along the road, on the streets or by the litter bins, toxic materials or chemicals in litter can be blown or washed into rivers, forests, lakes and oceans, and, eventually can pollute waterways, soil or aquatic environments. Based on recent data, 7 billion tons of debris enter the world’s oceans annually and most of it is long-lasting plastic. Litter also reduces air quality due to the smell and toxic/chemical vapor emanating from the trash. A polluted environment can encourage the spread of diseases. Toxic chemicals and disease-causing microorganisms in the trash may also contaminate water systems and spread water-borne diseases which can negatively affect the health of both animals and humans if unclean or untreated water is consumed.

A solution is no easy feat, and there is no one right answer. By partnering with Litter Free Roads & Laybys we hope to raise awareness on a national scale. A big part of the problem is people not realizing the consequences of their actions, by putting a clear message out there, we hope to stamp out this issue.

We use cookies on our website to give you the most relevant experience by remembering your preferences and repeat visits. By clicking “Accept All”, you consent to the use of ALL the cookies. However, you may visit "Cookie Settings" to provide a controlled consent.
Accept AllCookie Settings
Manage consent

This website uses cookies to improve your experience while you navigate through the website. Out of these, the cookies that are categorized as necessary are stored on your browser as they are essential for the working of basic functionalities of the website. We also use third-party cookies that help us analyze and understand how you use this website. These cookies will be stored in your browser only with your consent. You also have the option to opt-out of these cookies. But opting out of some of these cookies may affect your browsing experience.
Necessary Always Enabled
Necessary cookies are absolutely essential for the website to function properly. These cookies ensure basic functionalities and security features of the website, anonymously.
Functional
Functional cookies help to perform certain functionalities like sharing the content of the website on social media platforms, collect feedbacks, and other third-party features.
Performance
Performance cookies are used to understand and analyze the key performance indexes of the website which helps in delivering a better user experience for the visitors.
Analytics
Analytical cookies are used to understand how visitors interact with the website. These cookies help provide information on metrics the number of visitors, bounce rate, traffic source, etc.
Advertisement
Advertisement cookies are used to provide visitors with relevant ads and marketing campaigns. These cookies track visitors across websites and collect information to provide customized ads.
Others
Other uncategorized cookies are those that are being analyzed and have not been classified into a category as yet.
SAVE & ACCEPT
Powered by